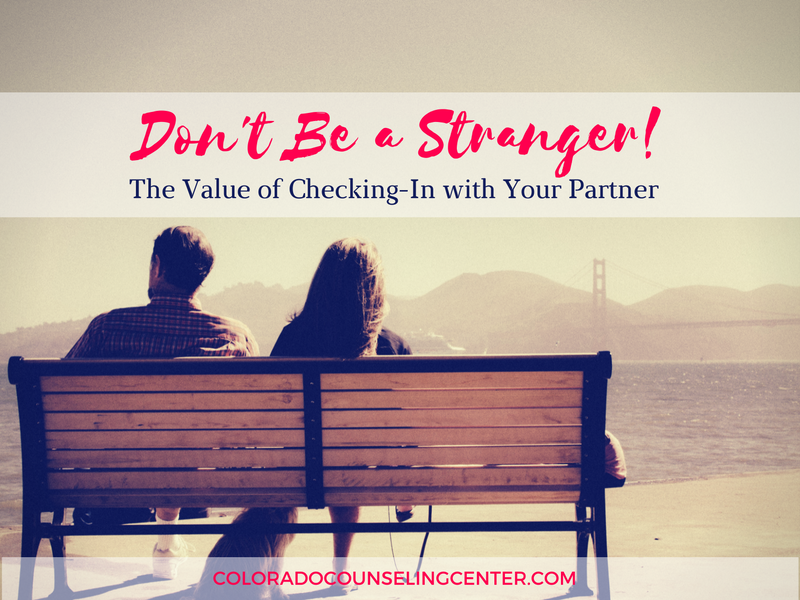 I have had a number of first sessions with couples where one of them ends up saying some variation of “I didn’t know.” Whether that is “I didn’t know you were so unhappy,” or “I didn’t know we were in such a bad place” or even “I didn’t know I was so miserable.” Sometimes this realization comes after a life-changing circumstance comes to light such as infidelity, addiction, financial betrayal, etc. Sometimes the realization comes too late and the relationship ends. While there are multiple issues and patterns that can leave a partner or partners in the dark, I would like to recommend one tool that can help to increase emotional connection and a couple’s ability to truly know each other: frequent check-ins.

An example from my own life has helped me appreciate the need for checking in. It’s fairly common for parents to ask their child at the end of the day, “How was your day?” My parents were no exception to asking this question and my one-word answers weren’t either. This must have been very frustrating for my parents to get the same response they often got from all of my older siblings before me. Maybe they hoped I would be different and would come home with an in-depth report of school, complete with the emotional ups and downs that are normal for a teenager. They were disappointed again and again.

Now that I have a kindergartner, I understand why they tried so hard. My son now attends kindergarten full-time which is a drastic change for us and him. Before, I could safely assume what his day was like because he would most likely be with my wife and daughters, most likely have watched one of three cartoon shows, and eaten one of three kinds of mac and cheese for lunch. And if I had more questions beyond that I could just ask my wife.

But when I drop him off in the morning at school, I am often left wondering “what kind of day is he going to have?” I almost have his daily routine down but I’m still left with gaping holes of insight into his emotional world. I want to know if he felt proud of himself today, if he had any sad moments where he felt left out, if he felt joy, if he felt embarrassed, if his confidence ever dipped, and many more. I want to know these things partly because I’m protective, to be sure. But mostly because he is in a new phase of his life and I want to feel like I am living some of that with him even though on the surface it is drastically different than my day to day. I don’t want to know how his day was in general so much as I want to know how it was for him.

Adult partners shouldn’t see themselves as needing this insight into each others’ world any less than I need it with my son. Partners are often physically separate for a majority of each day. Multiply that by 365 minus two weeks vacation and couples end up spending a majority of their shared lifetime apart. They have different and sometimes completely opposite experiences than the other. These experiences can bring up emotions that leave us questioning our own capacity, celebrating our victories, sighing with relief when a disaster is averted, and many more. With all of the possible opportunities for experience, is it enough to simply verify whether someone’s day was “good” or “bad”? I would say that it is not enough. And missed opportunities for connection can create future distance.

This thought isn’t meant to spark fear but rather to serve as an opportunity for more closeness with the person, and sometimes persons (kids, friends, etc.) that mean the most. Partners are likely able to make certain assumptions about their partner’s daily life but they are not likely to go beyond, “He has a hard job” or “She was busy today.” Furthermore, even if a partner somehow knows the other well enough to not even have to ask, connection comes through the act of sharing. It sends a message to the other person of “I want you to be a part of my life even when I’m not physically here.”

Some people need to warm up by giving a travelogue or a play-by-play of their day. Especially if the pace of the day or type of environment don’t really allow for much time or space to be self-aware of emotions. Or if by nature they aren’t used to leading with emotions. But eventually the check-in must come around to a place of talking about how each person experienced those events. “What was that like for you to have all that work to do? When the kids were crazy and kept making messes everywhere? When you were in that meeting that was dragging on? When you got that email from a worried client? What was that like for you to hit those personal goals in your workout?”

And the questions can sometimes lead to deeper considerations of these daily aspects of life. “Can I honestly ask you what it’s been like for you as a mother/father over the last few weeks?” “What has it been like for your working those hours the last couple of weeks?”

This practice may seem foreign, forced, and maybe even awkward in the beginning. They may sound like the kind of questions a therapist might ask. And they are. But the end results of you asking those questions are valuable, and much cheaper! For one, there is a built in message to your partner that, “this relationship means something to me, and so I am going to be more mindful of my day so that I have something to share when we are able to get together and talk.” A couple may feel like they are living on different sides of the universe but developing this habit says to the other “I’m thinking about us and you over here on my side.”

Another benefit is that partners create a place where anything can be talked about, especially the state of their relationship in terms of what seems to be going well, what needs to be worked on, relationships goals, etc. Many of my clients report that they simply weren’t used to talking about much at all, so they certainly wouldn’t have given a second thought to bringing in heavier and more vulnerable issues specific to the relationship.

As a final note, it isn’t necessary to sound like a therapist to feel connected to your partner and to know more and more about them. Be you. But be you with more sincerity, focus, and intention when it comes to finding out just what kind of day your partner has had.

One thought on “Don’t Be a Stranger: Checking-In with Your Partner”