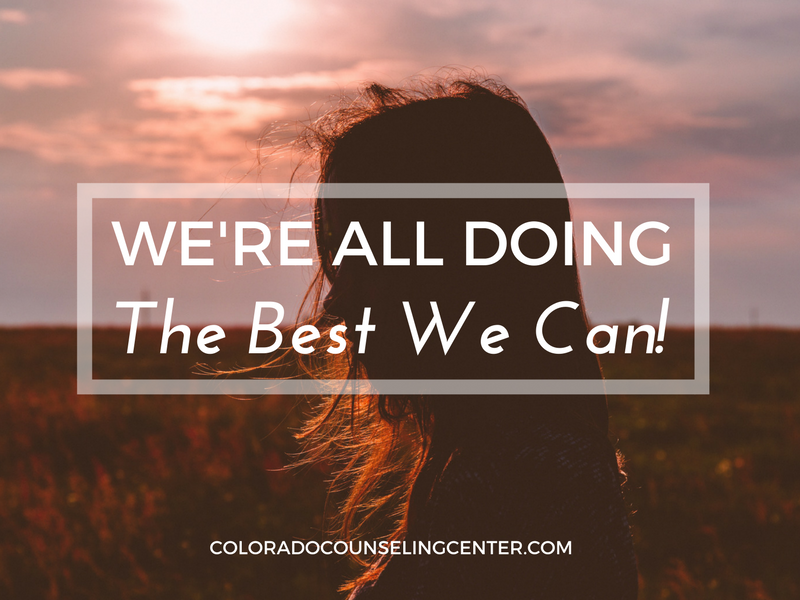 Do You Assume the Worst in Others?

In the day in which we live, it can be tempting sometimes to assume the worst in others. The driver who cuts us off can suddenly become an enemy to us. The child who defies our direction can be seen as rebellious and troublesome. The spouse who ignores or lashes out can be seen in the moment as uncaring and hateful. Yet, the reality, as unreal as it may seem, is that we’re all doing the best we can, given the knowledge and experience we have gained up until that point in our lives.

Brené Brown remembers believing for the first 35 years of her life that people were “sucking on purpose just to piss me off.” But then she was asked by her therapist to consider, “what if everyone was simply doing the best they could?” She hadn’t really considered that before. Over time, she realized that she would never really know if people were doing the best they could or not, but it made her life better having that assumption. “To assume the best about people is almost an inherently selfish act…because the life you change first is your own.”

I watched a documentary on solitary confinement recently, highlighting a facility that specializes in locking up the worst of the worst. The prisoners that go to this facility were people that were already in prison and went above and beyond to attack, hurt or kill another prisoner or guard. The prisoners at this special facility are locked up in solitary confinement for 20+ hours per day. It was a very impactful documentary for two reasons.

First, it reminded me of how we are fundamentally wired to connect as human beings. We aren’t meant to be solitary creatures. The men and women in this facility, who might typically be seen as “touch-me-nots” and stand-offish were hungry for connection with other human beings. They were literally going crazy not having someone else to talk to and connect with. Some of them even resorted to having conversations through the air vents with the person next door.

The second thing that really impacted me was how sad it was that these people had arrived at this place in life. The idea that we’re all “doing the best we can” applied even to these people. The interviews with these people told much about their history and what they grew up with. One man shared the following: “All I’ve ever known in my life is violence.” He recounted his father beating him mercilessly growing up. As he got older, dad would push him to fight other boys at school, to “be a man” and stand up for himself. He was taught to bury emotion, be “strong” and always dominate those around him. Truly, all this man had ever known was violence. Not surprisingly, he got in trouble with the law as he became an adult and eventually killed a man, putting him in jail. While in prison, he killed another prisoner—which landed him in this special, more restrictive prison. As he talked, I could see the humanity in him. I could see the hurt, the loneliness, the hunger to be loved and accepted as a worthy human being. Having seen all that though of course didn’t change what he had done, the horror he had caused in other people’s lives and the danger he would obviously be to society at large…however, it also brought immense sadness to me for the environment he had grown up in and how he had turned out as a result. Believe it or not, this man was doing the best he could given the experience and knowledge he’d been given growing up. Unfortunately, he was a danger to society now and needed to be kept under lock and key.

Think of something you did or said in the past that has brought you regret and remorse. We all have experiences like this and we often beat ourselves up over it, wishing in retrospect that we had acted differently. The thing we don’t realize though is that the only reason we can look at our past self and wish we had done something differently is because we’ve grown and learned from the experience. Had we not learned anything from it, we’d simply go on blindly making the same mistakes over and over again. Does anyone else see the injustice in what we do to ourselves in these moments? We’re condemning our past selves based on current knowledge and experience, knowledge and experience which we did not have at the time. We were simply doing the best we knew how in that particular moment. Because we experience remorse over something we said or did, that means we recognize that something could have been dealt with differently. We’ve learned from it and we typically plan to do things differently in the future. Had we not made the mistake we did, we wouldn’t have learned a lesson from it. As we learn to look at our past mistakes this way, we come to see them less as mistakes and more as learning opportunities and moments of growth. And then over a lifetime, we see a journey of learning opportunities that have helped make us who we are today.

Most of us as we age wish we could take our adult brain and put it into the head of our younger self so that we could live a “better” life. We sometimes get stuck wishing we had made a different choice at a defining point in our lives. That obviously can’t happen. We can’t change the past. What we can change though is how we view those events. After all, if we were to go back and change a significant moment in our lives, it could have permanent consequences that would completely change where we went and what we accomplished. A woman I met with once told me of all the hurt and pain she’d gone through in her marriage and how sad and eager she was to end it and get a divorce so she could move on. I wondered if she regretted marrying her husband. On the one hand, the easy answer would be yes because of everything she’d been through…but after some thought, she remarked: “And yet, if I had to do it all over again, if I had to marry him again, I would. Those experiences have helped make me the woman I am today…and I wouldn’t have the beautiful children that I have today had I not married him.” And so, even in the darkest of moments, the experiences we have help make us who we are.

As we exercise compassion on ourselves and recognize that we were simply doing the best we could at the time, we will find ourselves showing that same compassion towards others in our lives. We’ll come to recognize that my spouse who seems emotionally stunted or overly emotional about things is simply trying to reach out to me in the only way he or she has ever learned. We’ll come to recognize that the “jerk” standing in line at the grocery store has perhaps had a rough day, a rough week or simply a rough life. All of us carry heavy bags on our backs full of regrets and remorse. As we learn to take those out of our own bags and see the way it’s changed us and how we’ve grown from it, that allows us to drop it on the ground and lighten our load. We begin to see and treat ourselves more compassionately. We can then do the same for others around us too.

I hope that we can all come to recognize that we’re doing the best we can. Let us help you in that journey. Don’t hesitate to contact us.

2 thoughts on “We’re Doing the Best We Can!”